Bilbaina triathlete Virginia Berasategui has confessed today that the dispute was doped to Bilbao Triathlon past May 18, she won, and that it was a mistake by apologizing everyone.

BILBAO. In an appearance in Bilbao where he has been sheltered by his father, triathlete, between sobs continued, read a statement in which he stated that “I am sad to end my career like this, but I’m glad I made the decision to confront the reality of things and tell the truth. “

Berasategui started his story by confessing that “for over a year, I’m fine. My body is torn by numerous injuries and mind broken by the sacrifices and demands associated with this sport.”

The last three years, has detailed, “without living have been thought of withdrawal and start building a different life. The reality is I do not know if I’m ready for what awaits me out,” admitted the 37-athlete years.

After he confessed his doping: “I am here to stand up and apologize. Throughout my career I have spent hundreds of controls and has always been clear that I played fair. Now, at the end of my career, I have fallen in the worst mistake in which an athlete can fall. “

The positive-a substance that has not been made public, it was announced on June 14, and triathlete not going to wait for the results of the counter-analysis. “I have decided that I will not appeal because I know my guilt. Could have tried to move on, look for external causes, but .., why?.’ve Decided to face the truth, because life goes on and I continue to be open and honest “.

“Trying to prove that this was not true it would have been a betrayal of myself and those who love me. Would have been cover up a mistake with another mistake.”

These days, the triathlete has recognized that living a “terrifying experience”, and therefore spend days left before appearing to be a little better. “All comments, all comments, all the criticism that can be made on the positive, I’ve done it myself.”

Berasategui has asked “forgiveness from all the people who have cheated, especially those people who have always believed in me, my sponsors, institutions, all athletes, amateur and professional.”

“I know my act of weakness has been great but it comforts me to think that there are many people that despite the action that I made, the first victim I am, forgive me.”

The triathlete has ended his appearance and his departure expressing his “sincere apologies and my sincere thanks to everyone, to all those who have accompanied me in this long journey of my sporting life.”

Berasategui (Bilbao, 1975) was world champion long distance triathlon in 2003 and had announced on April 4 that this would be his last season.

In his appearance, besides being accompanied at the table by his father, has been sheltered by the Councillor for Sports of Bilbao, Sabin Anuzita (PNV), the PP mayor Beatriz Marcos, and former basketball player and former president Jon Xavier of Bilbao basket Davalillo. 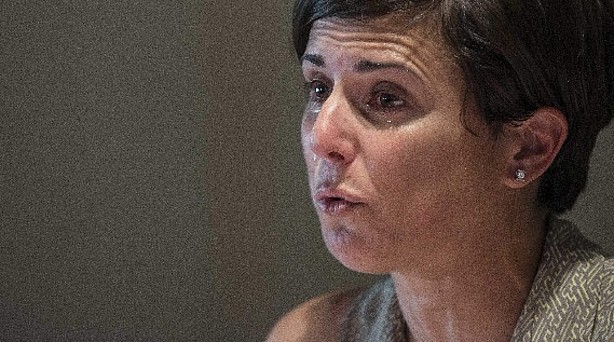 1,965 thoughts on “Virginia Berasategui confesses that was doped in Bilbao and apologizes to all.”